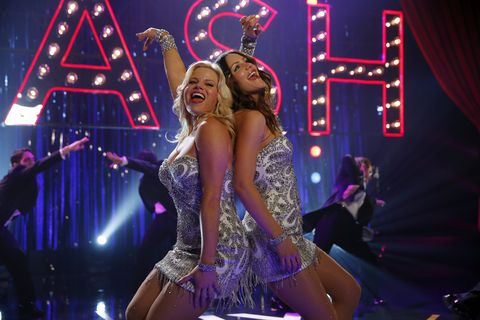 Finally, at long last, some good news. Last night, People.com and various People-related platforms aired a livestream of Bombshell in Concert, a special 2015 reunion performance of the criminally under-watched NBC show Smash, to benefit the Actor's Fund. And the human race got one step closer to being redeemable.

Yes, that's right; we have finally done right by the 2011-2013 dramedy which covered such wildly popular topics as: a Broadway musical about Marilyn Monroe featuring two leads, the resurgence of McPheever, Theresa Rebeck's scarf collection, the world's richest dramaturg, the question of whether you can be engaged and in tech at the same time (you cannot), Anjelica Huston's martini-throwing hand, and a stunning addition to the Jennifer Hudson Shows Up, Sings Her Face Off and Steals the Show collection.

Bombshell in Concert was everything a Smash fan has come to know, love, and begrudgingly accept. And all of it—the stunning vocals, the strange live-tweets, and this morning's announcement that a Smash Broadway musical is officially on the way—is proof that there is still goodness and delight in this thing we call life. I haven't felt this hopeful since I watched the Hot Priest Andrew Scott recite a poem aptly titled "Everything Is Going to Be Alright."

I am now with child and the father is this video of Andrew Scott reading Derek Mahon’s poem Everything Is Going To Be Alright’ ❤️ pic.twitter.com/XjtPWCSDoG

With production halted on any show that can't be filmed in Whoopi Goldberg's guest room, the entertainment industry has had to get creative with the content it's producing, pivoting to reunion specials filmed on iPhones, cast script readings, and most crucially, straight up showing us stuff we've already seen and want to see again. Like a concoction created in a lab devoted solely to my personal delight, Bombshell in Concert was a mix of all of those things. Originally performed as a live event that sold out in mere minutes, the special featured song-and-dance numbers from the first season of Smash interspersed with Debra Messing reading a book report on Marilyn Monroe. The footage had been locked away from the public in a vault for five years until this week, when it was freed, National Treasure-style, and released to the delight of dozens.

Watch the stars of Smash (virtually!) reunite for #BombshellinConcert, a never-seen sold-out live performance featuring songs from the NBC series to benefit The Actors Fund. 🌟 https://t.co/oMV6DhLVqi

At intermission of the livestream, Julie Klausner hosted a remote cast reunion, the highlight of which was Debra Messing dialing in with hair that seemed to get larger every time they cut back to her. It was like she was auditioning for the role of Audrey II in Little Shop.

Messing, a blessing, also positioned herself in a shot that included the back end of a painting of a horse and a Peloton. Perfection. This is the level of visual non sequitur and chaotic energy that true Smash fans tune in for. A series that veered wildly in tone and logic, Smash felt like that one episode of Grey's Anatomy where everyone burst into song because Callie was near-death. The only difference was on Smash people singing were the likes of Megan Hilty, Katharine McPhee, and Leslie Odom, Jr., and they were belting songs by Marc Shaiman, Scott Wittman, and Joe Iconis. It was a treat for the ears and a fever dream for the brain and nothing has ever been better.

The livestream followed in the show's intricately choreographed steps, featuring raise-the-roof performances of "Let Me Be Your Star" and "Let's Be Bad" alongside such highlights as McPhee and Hilty jumping their cue to bow multiple times.

Some of the show's stars also live-tweeted the livestream, which meant we were treated to more playful sparring between Hilty and McPhee, the show's leads and rivals. Somehow that also translated into Katharine McPhee filming an Instagram filtered video asking fans to publicly tweet her Zoom links to their watch parties so she (and presumably literally anyone on the internet) could pop in. She also ended the night dancing to Hilty's singing in front of two Grammys and an Emmy. Who could ask for anything more than this? Now we need to work on getting Hilty the Tony for her performance in this and McPhee a Webby for her performance in my Zoom watch party and we'll finally reach utopia.

Smash may not have had Big Bang Theory-sized ratings while it aired, but we should all feel vindicated by the fact that only one of those shows had a musical spectacular tribute broadcast across various social media platforms on a Wednesday night during a pandemic. It's like Uma Thurman famously said, the arc of history is long, but it bends toward justice for Smash.